And if your impulse is to respond with “all lives matter”, let me throw you a bit of a story.

There’s this child. Their name is Alex. Alex gets bullied at school.
The bullies are keeping Alex out of the cafeteria. Alex isn’t allowed to eat lunch with the other kids.

That’s what “all lives matters” sounds like. Because yes, of course, in an ideal world “all lives matters” is technically correct. But we don’t live in an ideal world, we live in one with systematic racism, and just like how Alex didn’t get to eat in the example above, black lives aren’t treated like they matter. So stop living in a fantasy and get into the real world.

Also, since I wanna put this everywhere and need justification for putting the queer/trans tag on this… Uuuhm… Black Trans Lives Matter!

I don’t have much to contribute to the BLM movement sadly. I’m a strongly anti-racism, but… Long before this wave of civil rights centered around racial issues became a thing, I distanced myself from the conservative circles which tends to house the racists. Turns out, by distancing myself from transphobes for self-preservation reasons, I also made my voice quite a bit quieter when I want to speak out for another marginalized group. I’m sorry.

But I did start a blog a while back, and while I haven’t been very active on it, it’s technically a platform, one I haven’t used to voice my concerns about this until now.

Onwards to what’s going on in tech. Okay so let me come clean and say that my first gut reaction to the idea of starting to change tech vocabulary was a “that’s silly”. I’m involved with tech, I don’t consider myself a racist, therefore, that something I engage with on a daily basis could be considered part of systematic racism was something I, instinctively, flinched away from. Here’s the thing though, through learning what privilege is, how systematic bullshit operates etc. I’ve learned that my conscious awareness or compliance with systematic racism isn’t necessary for me to perpetuate it. I can be part of the problem without thinking I am.

For those not in the know, currently, GitHub is changing the name of the default branch from “master” to “main”, to avoid referencing slavery. And here’s the thing. I never considered it a problem.

To me, who’s white, who lives in a very progressive country. My race wasn’t enslaved. To me, calling the “master” branch “master”, was just… what it was called, similar to how, in the record industry, they have the “master copy” or “master record”. But there’s a fundamental difference between the record industry and the tech industry that needs to be addressed here. The record industry did NOT in fact go on to use the word “slave” for things.

The tech industry have, historically (things are changing, and it’s about time), used master/slave terminology for A LOT. I’ve used it without second thought. Because I’m white, and I don’t feel anything in particular on a personal level about the word “slave”. But, if using different words than “master/slave” helps making other people feel less targeted and devalued, the least I can do is to use a different word. At my old job at a e-commerce site, less than 7 years ago, we used a master MySQL server, and several “slave” MySQL servers. And yes, these servers aren’t people. But those who maintain it, who talk about it, are. And if some of those used to be enslaved because of racism, maybe it’s time to show those that we’ve evolved beyond using the language we used to see them as sub-human?

Similar things are discussed with blacklists and whitelists, where they are being replaced with more descriptive terms like “allowlists” and “denylists”. The process is slow, but I’ll try my best to change my personal language here.

So what about GitHub then? We don’t have “slave” branches, we have the “master” branch, which has all kinds of non-racist justifications for why it could be called that. But… at the end of the day. Our industry adopted master/slave terminology elsewhere. We adopted the terms blacklist/whitelists. We created a culture and a context where these terms have been used in racially insensitive ways. And some of us are trying to change that climate, by renaming “master branch” to “main branch” which, for the record, will be WAY less confusing to new people and is WAY more descriptive, isn’t a bad thing. Look, naming things is hard, it’s even a meme in the programming field: 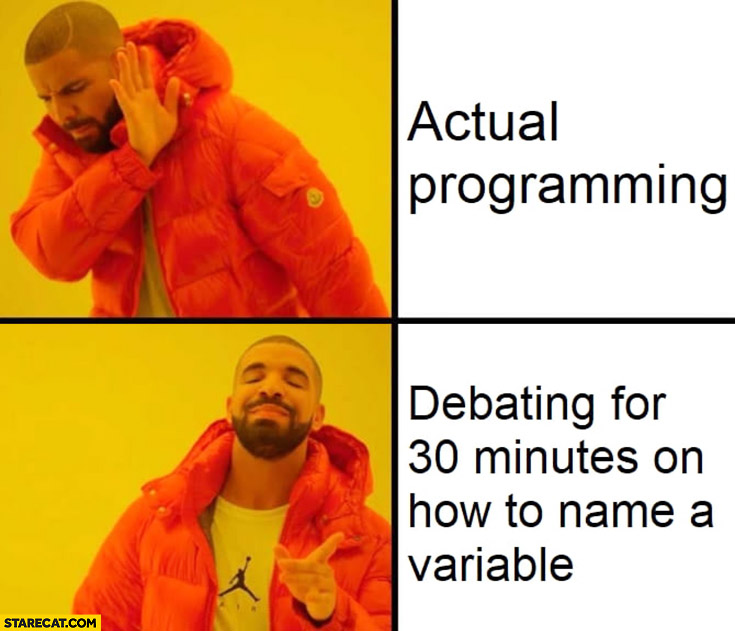 And the point of renaming “master” to “main” on GitHub, and possibly the entire git ecosystem, is to raise awareness. To make people know that “you’re welcome here”. As so so so many “memes” I’ve seen pointed out, no. This won’t “solve” racism. But it was never meant to be. It was about renaming something to something with a less loaded and more descriptive name. So stop trying to sound like “this is completely ineffective in the fight against racism” because WE CAN WORK ON MULTIPLE FRONTS.

Anyway, as promised. Here's Kimberly with some actual words about the bigger issues: